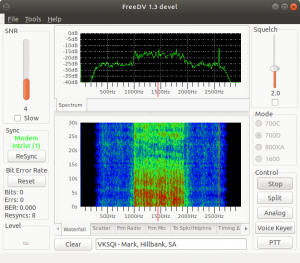 FreeDV is a Digital Voice mode for HF radio. You can run FreeDV using a free GUI application for Windows, Linux and OSX that allows any SSB radio to be used for low bit rate digital voice.

Alternatively you can buy a SM1000 FreeDV adaptor that allows you to run FreeDV (1600 and 700D modes) on any HF radio without a PC or sound card.  If you are a hardware or software developer, you can integrate FreeDV into your project using the LGPL licensed FreeDV API.

FreeDV is being developed by an international team of radio amateurs working together on coding, design, user interface and testing. FreeDV is open source software, released under the GNU Lesser Public License version 2.1. The modems and Codec 2 speech codec used in FreeDV are also open source.

Amateur Radio is transitioning from analog to digital, much as it transitioned from AM to SSB in the 1950’s and 1960’s. How would you feel if one or two companies owned the patents for SSB, then forced you to use their technology, made it illegal to experiment with or even understand the technology, and insisted you stay locked to it for the next 100 years? That’s exactly what was happening with digital voice. But now, hams are in control of their technology again!

FreeDV is unique as it uses 100% Open Source Software, including the speech codec. No secrets, nothing proprietary! FreeDV represents a path for 21st century Amateur Radio where Hams are free to experiment and innovate, rather than a future locked into a single manufacturers closed technology.

Controlled testing suggests FreeDV is comparable to and in some cases works better than SSB on low SNR channels.

Urban HF noise is a growing problem for SSB communications. Hams around the world are using the advanced FEC and modem technology in FreeDV to overcome urban HF noise in channels where SSB is unusable.

FreeDV 1600 and 2020 is being used over the QO-100 satellite, and for experimental combinations of Internet and HF radio to overcome poor propogation.

Here is what you need:

If you don’t have a built in sound card for digital modes you can use the normal audio inputs and outputs of your radio. The same cables and hardware that you use for other digital modes that are based on PC programs will work with FreeDV, but you will need a second sound interface for the microphone and speaker connections to the FreeDV program. A USB headset of the sort used by gamers is all you need for the second sound interface.

Turn off as much processing as possible. In general noise blankers, DSP band limit filtering and narrow bandpass filters are more likely to hurt than help, while compression, DSP noise or carrier elimination, and voice processing are definitely wrong for digital modes. FreeDV’s HF modem does its own DSP, and in general this is true for other digital programs as well.

You can see the received effect of different settings in the S/N (signal to noise ratio) display of FreeDV. A higher S/N is better.

Drive your transmitter to an average power of about 20% of its PEP power. There is a 8-12 dB peak-to-average power ratio in our HF modem. Over-driving will reduce the received S/N. More is not better for DV!

Who can I Talk To?

Login to the K7VE FreeDV QSO Finder to find other Hams using FreeDV.

For casual chat there is a #freedv IRC channel on irc.libera.chat port 6697

FreeDV is being maintained and extended by Mooneer Salam K6AQ and David Rowe, VK5DGR. Richard Shaw KF5OIM maintains the Cmake build system and Fedora packaging. Walter, K5WH is leading Windows testing in the USA. Debian packaging thanks to A. Maitland Bottoms (AA4HS) and the Debian Hamradio Maintainers.

As development continues, many people are helping whom we have not credited on this web site, but we appreciate all of their work.

The FreeDV design and user interface is based on FDMDV, which was developed by Francesco Lanza, HB9TLK. Francesco received advice on modem design from Peter Martinez G3PLX, who has also advised David on the FDMDV modem used in FreeDV.

Mel Whitten, K0PFX has contributed greatly to the design, testing and promotion of several Digital Voice systems, including FDMDV. This practical experience has led to the current design – a fast sync, no FEC, low latency system that gives a “SSB” type feel for operators. Mel and a team of alpha testers (Gerry, N4DVR; Jim, K3DCC; Rick, WA6NUT; Tony, K2MO) provided feedback on usability and design of FreeDV.

Bruce Perens has been a thought leader on open source, patent free voice codecs for Amateur Radio. He has inspired, promoted and encouraged the development of Codec 2 and FreeDV.

Adding FreeDV To Your Hardware Product or Software Project

If you are a hardware or software developer, you can integrate FreeDV into your project using the LGPL licensed FreeDV API.

No license fees are required to use FreeDV. Including it in your project is a simple as compiling a library of C code. FreeDV does not require an operating system, it runs happily “bare metal” on small machines such as micro-controllers. It does require a hardware Floating Point Unit (FPU).